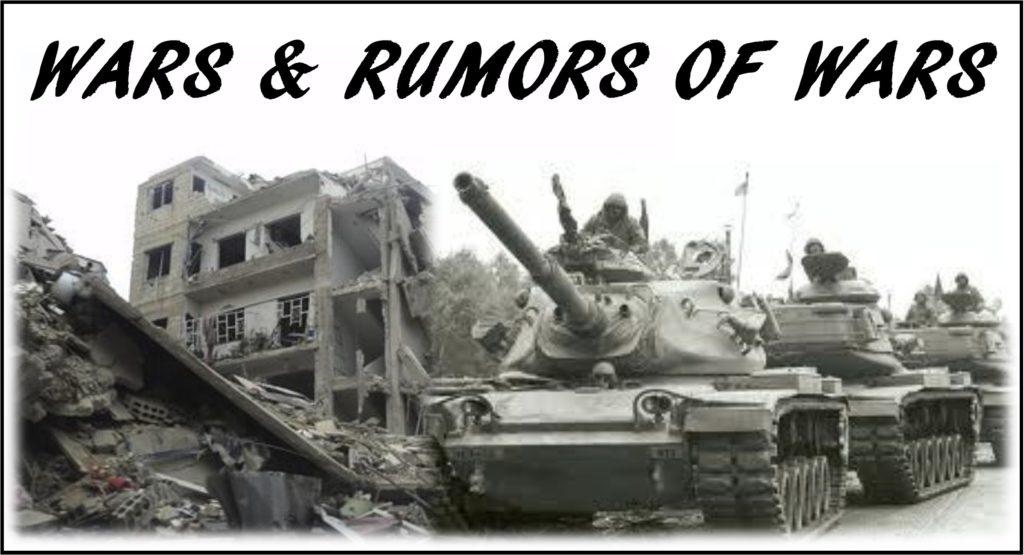 Jeremiah 49 Destruction in the Middle East

…before the fall of Babylon in Jeremiah 50 & 51?  Did you know Donald Trump recently declared Israel’s sovereignty over Hatsor…

As promised in our last blog post I did a little studying of Jeremiah 49 and found that its all about some major wars in the middle east.  Based upon scripture and especially Revelation 12:15-17 I have always believed there will be a major war in the middle east where many of the Islamic nations surrounding Israel that want to come against the ‘woman’ sIrael will be destroyed.  (This is the flood of nations that come against the woman spoken of in Revelation 12:15-17 that the earth helps to swallow up.)  Sadly along with them much of Israel will be destroyed in this great war as well.  Perhaps destroying much of the paganism and abominations taking place over there right now.  Once this war takes place alot of real estate will open up, perhaps allowing the return of many Jews and others of us that are grafted into Israel through Y’shua who want to return but cannot right now.

Then after this M.E. war when the dragon that spewed out the flood against the woman in Revelation 12:15-17 sees that his plan to push Israel off into the sea has been thwarted he goes after the remnant of her seed around the earth and probably most especially in the physical end times daughter of Babylon (which I believe describes the US to a tee).  This causes major wars and the destruction of the end times daughter of Babylon described in detail in Jeremiah 50 and 51.  Revelation 18 warns us toe ‘Come out of her my people’ when Babel is about to fall in judgement.  Jeremiah chapters 50 and 51 tell us when the fall of Babylon occurs, to ‘let Jerusalem come to our minds’ because there ‘will be an escape’ there.

Therefore in studies it totally makes sense to me that Jeremiah 49 is all about the war that takes place in the M.E. prior to the fall of Babylon opening up the opportunity of an escape back to the Promised Land for those of us ready, paying attention and seeking His will in prayer and study of His Word.

Summary of Jeremiah 49:  Verses 1-6 foretells a major conflict in Rabbah of the Amonites which is today Amon, Jordan the capital of Jordan.  It ends up a heap and a wasteland with her villages being burned with fire after which it says YHWH turns back the captivity of the children of Amon.  Then verses 7-22 are all about the judgement of Edom which I understand to be modern day Saudi Arabia, comparing it to the overthrow and destruction of Sodom and Gomorrah.  Verse 16 corresponds with Obadiah 1:3-4 and verse 17 corresponds with Isaiah 34:9-10.  Then verses 23-29 talk about great destruction in Damascus, Syria which of course we have been seeing for several years and is still in progress.  Verses 30-33 are about the King of Babel taking counsel against Hatsor and devising a plan against it.  Hatsor is the modern area called the Golan Heights.  What happened recently in the Golan Heights?  President Donald Trump declared that Israel was no longer an occupier but instead now has sovereignty over the Golan.  I wonder if this has anything to do with all of the oil that is supposed to be there and is this part of the king of Babel’s plan being devised against it?  Then last of all in verses 34-39 Eylam, which was the area of ancient Susa or the capital of ancient Persia in the book of Esther, is broken and the inhabitants are scattered to the 4 winds after which YHWH turns back the captivity of Eylam.  Its interesting that verse 38 says YHWH is going to set His throne in Eylam… hmm, that certainly is material for another study someday.  Eylam today (if my research is correct, let me know if I’m wrong) is located just outside the southern most edges of both Iraq and Iran and is called the Ilam Province.

So then, Jordan, Saudi Arabia, Syria, the Golan Heights, and the capital of the ancient Persian Empire which of course encompassed both Iran and Iraq will possibly all be destroyed in a great war (or wars) in chapter 49 possibly just prior to the fall of Babylon in Chapters 50 & 51 of Jeremiah.  Don’t take my word for it, I hope this short commentary wets your appetite to do more of an in depth study for yourselves on the fall of Babylon and the wars in the middle east that will likely precede it.

If you are interested in watching some in depth Revelation and signs in the heavens timeline videos which also includes information regarding Jeremiah 50-51 as they related to the Revelation timeline, please check out our video page.  The two videos are ‘Revelation Signs, Teach us to Number our Days’ and ‘Revelation Signs, 80 Years if Due to Strength’.  The theory behind placing the Revelation timeline on a chart (which you can also download from a link below each video) is Psalms 90 which I believe is all about teaching us to number our days until His return as we are told in Psalms 90 itself which also says a generation is 80 years if due to strength… 80 years from when Israel again became a nation in 1948 (and was recognized by the UN in 1949).  80 years later this generation would end in 2028-29.  What are the signs occuring in the heavens over the next 10 years or so?  You might be quite surprised as I was!  Check it out!  Blessings and Shalom to all of you and everyone in your homes!

Thanks for subscribing!
SO SORRY, OUR OLDER (PRIOR TO JULY 2021) BLOG VIDEOS THAT WERE POSTED TO MESSIANIC LAMB NETWORK’S YOUTUBE CHANNEL HAVE BEEN DELETED WITH THEIR CHANNEL. HOWEVER OUR NEWER VIDEOS THAT HAVE BEEN POSTED TO OUR BLOG PAGE AFTER JUNE 2021 ARE STILL AVAILABLE!!!  WE HAVE NOT POSTED ANY VIDEOS TO LAMB NETWORK’S YT CHANNEL FOR ABOUT A YEAR IN ORDER TO AVOID BEING THE CAUSE OF EXACTLY WHAT JUST HAPPENED. THEIR YOUTUBE CHANNEL HAS BEEN CENSORED, BANNED AND COMPLETELY DELETED WHICH IS WHY ALL OF OUR PAST VIDEOS ON THIS PAGE (AND MANY ON OUR BLOGS AS WELL PRIOR TO OUR SWITCHING PLATFORMS) ARE BLANK WITH THE BANNED YOUTUBE MESSAGE.
ALL OF OUR DELETED PAST VIDEOS (WHICH HAD THOUSANDS OF VIEWS ON YOUTUBE PRIOR TO BEING DELETED) ARE STILL AVAILABLE VIA THUMB DRIVES WHICH YOU CAN ORDER FROM US WITH A DONATION OF ANY AMOUNT JUST MAKE THE NOTE “THUMB DRIVE” WITH YOUR DONATION (LINK BELOW). THE THUMB DRIVES COST US ABOUT $20 EACH INCLUDING PRIORITY SHIPPING AND TAKE US ABOUT AN HOUR EACH TO MANUALLY COPY ALL OF THE FILES TO BUT WE ARE HAPPY TO PROVIDE THEM AT NO COST TO YOU (AFTER ALL IT IS “HIS WORD” THAT WE ARE TRYING TO GET OUT TO THE WORLD AND GLORIFY) IF YOU ARE UNABLE TO MAKE A DONATION AT THIS TIME. SIMPLY EMAIL US AT hwh@hiswordheals.com with your address.
YOU ARE ALSO WELCOME TO COPY AND SHARE (WITHOUT ANY CHANGES) ANY OF OUR PROGRAMS OFF OF THE THUMBDRIVE YOU RECEIVE. IT’S ALL FOR HIS GLORY AND TO BLOW THE SHOFAR AND WARN/EDUCATE HIS PEOPLE. SO PLEASE SHARE AS YOU ARE LED. AGAIN PLEASE VISIT OUR BLOG PAGE FOR NEWER VIDEOS THAT HAVE BEEN POSTED TO OUR HIS WORD HEALS BITCHUTE & BRIGHTEON CHANNELS OVER THE PAST YEAR OR SO. THANKFULLY THESE PLATFORMS DO NOT BAN FREE SPEECH.